PLEASE READ: It's come to my attention that a few people have been re-publishing my tutorial on their own sites, and hot-linking the photos from my server, without my permission.

Sure, they've included a link back to this page, but why bother reproducing the article at all?

I like to think I'm a friendly and reasonable guy, which is why I'm offended that  these people didn't think it was worth their time to send me an email asking "hey, is it all right if I do this?"

Come on, guys.  Show me some courtesy here.

Any action figure collector or modeler will eventually want a building or three to augment and enhance their diorama displays.

There are a few commercially-available 1/18 (GI Joe-scale)  buildings out there, and many collectors use them in their dioramas.  Unfortunately they're becoming scarce and are quite expensive even on the secondary market.

I wanted to stick to my philosophy of  "doing what I can with what I've got", so I decided to make a building using whatever materials I had on hand - and what I had on hand was cardboard.  Lots of it.

I work in warehousing, and a lot of cardboard boxes and sheets of different sizes get thrown in the recycling bins each day.  Lots of free modeling material right there.

The only materials I bought were: plain MDF craft placemats for bases, square-section pine rod for pillars, and cork sheet for the roof.  All of these can be had for a modest outlay and will be enough for two or three additional projects.

It's the same with paint.  Here's a handy tip for cheap, durable paint:
Go to the section of your hardware store where they mix paint to the required shade, and ask for mis-tints (when the paint is mixed to the incorrect shade and can't be used). They can't sell these, so you can get them cheap.
I was able to get small tins of grey and earth-coloured latex paint for literally pocket change, and they have lasted several months.  Make sure you get matte-finish interior latex paint.

Anyway, I had several of these materials stockpiled already, so the total monetary cost of this particular project was $0.

I wanted a two-storey building with a front overhang, in a generic style which would fit in with most settings.  I also decided not to build an interior, so I didn't cut any doors or windows into the boxes.

I experimented with two small cardboard boxes to establish the rough shape. 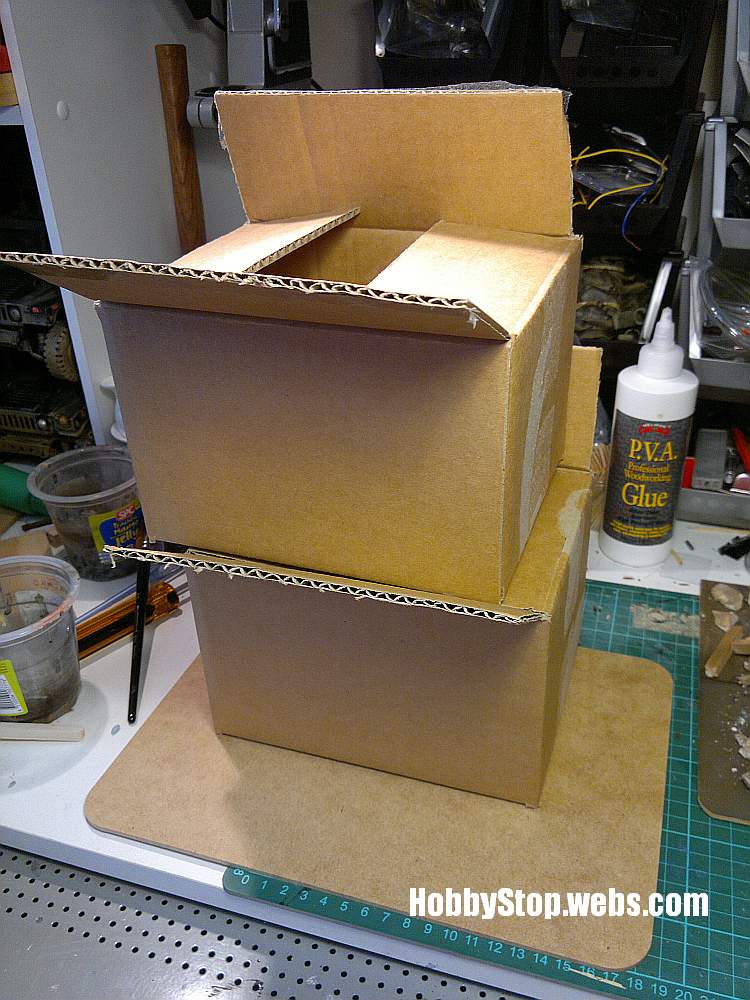 Once I was happy with the basic shape, I glued the boxes together and weighted them down with some heavy books. 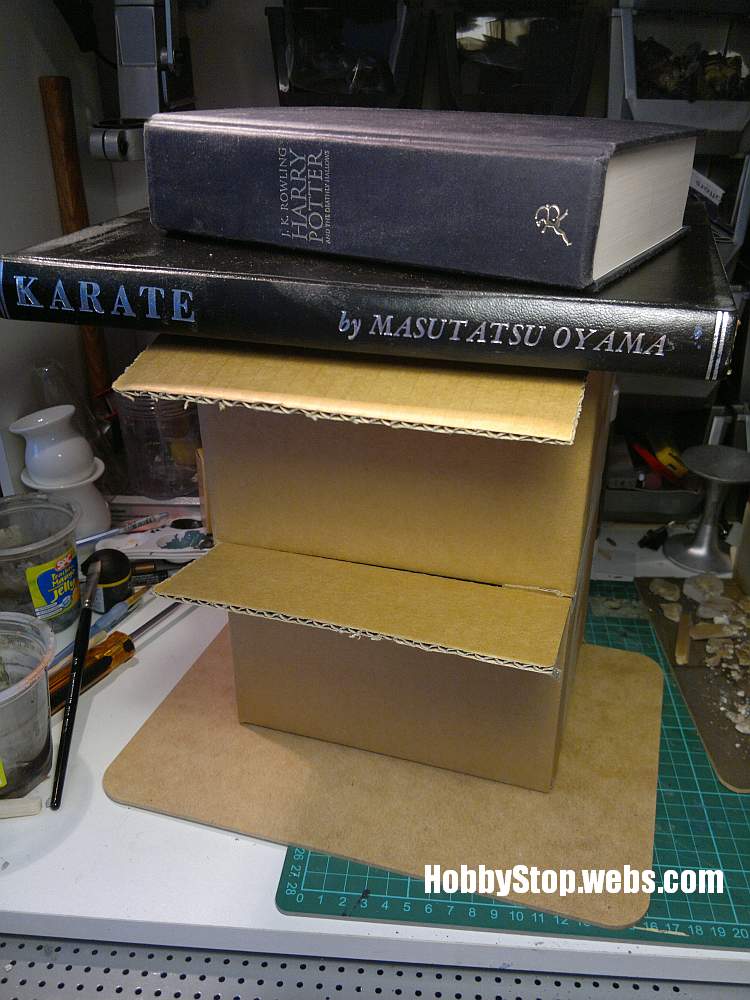 I cut a few lengths of pine rod for the pillars.  Note that the box flap would be part of the floor on the upper level, so I marked where the pillars would go through. 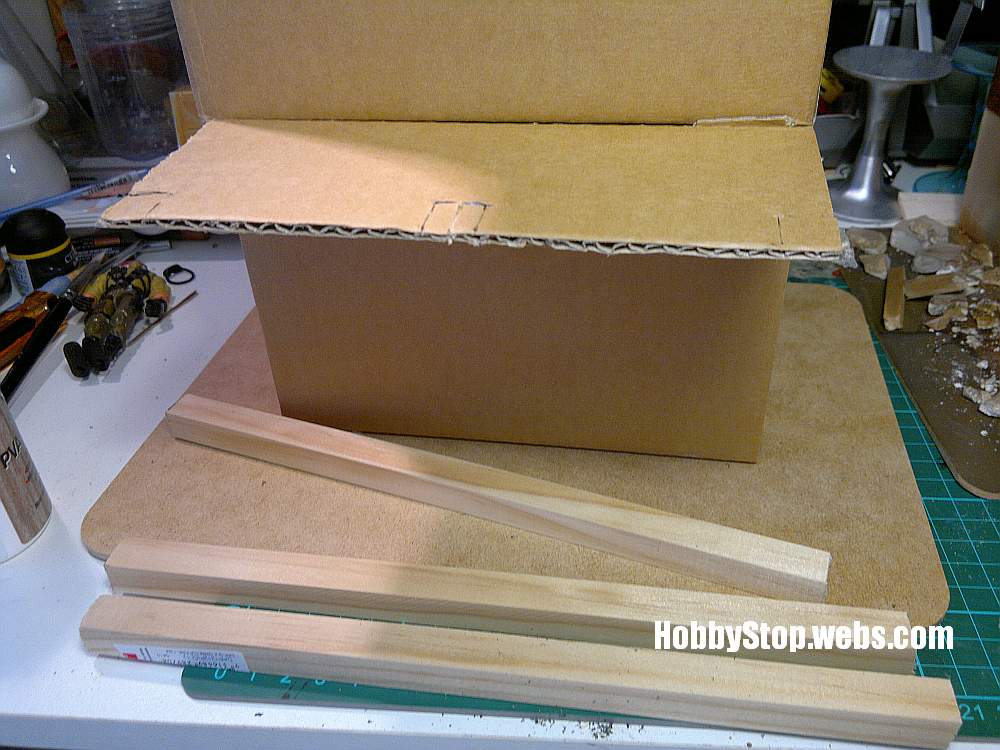 I then glued the pillars in place, using a try square to ensure they were vertical. 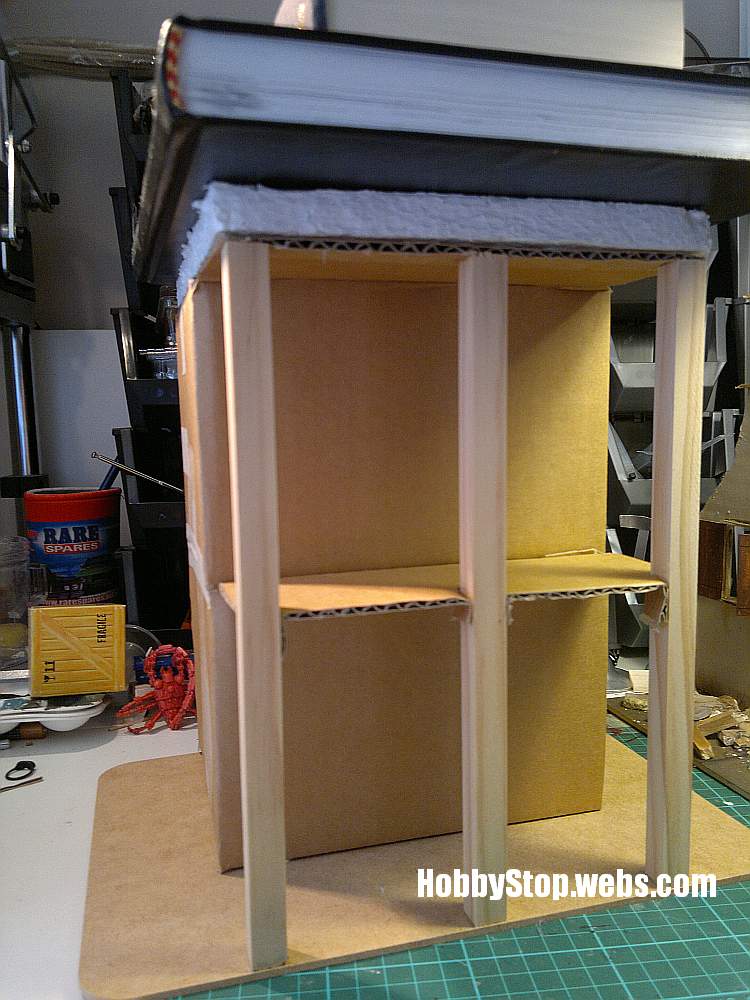 Once the glue had set, I skinned the building with thinner cardboard.  My original plan was not to have window openings, and to just glue on closed shutters to simulate windows.
But I eventually decided to cut out the two front windows for visual interest and for a good spot to put a sniper or two.

The only precise measuring I did was for the arches above the windows and pillars.  The rest of the "skin" was just trimmed to shape and glued on. 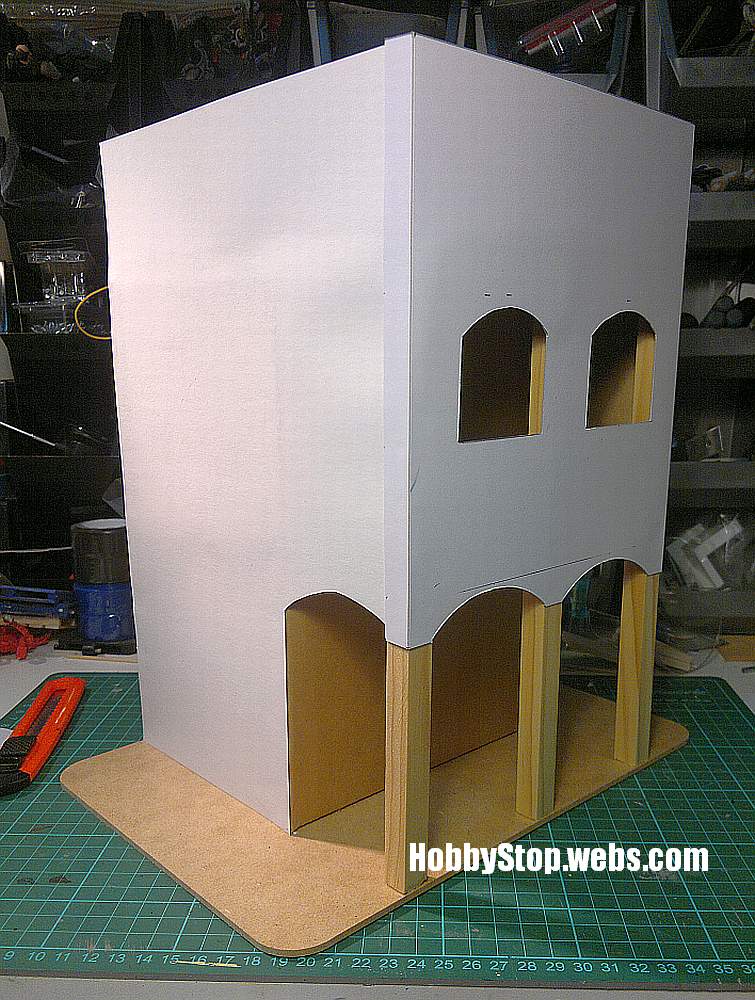 Once it had set, I glued on a few more details like window sills and mouldings, made from strips of cardboard.  I cut a piece of cork sheet for the roof.  Fine-grained cork has a texture that's great for sandy roofs and streets.

I glued wide strips of foam-core board to the roof edge for additional thickness and strength. 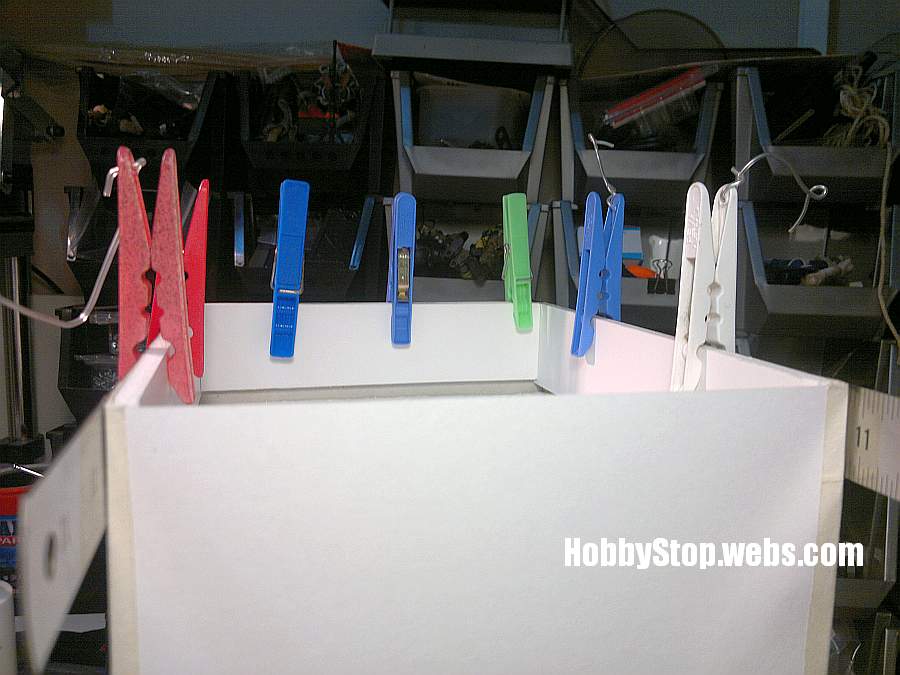 I then painted the building in a rough base coat of latex paint, applied with a 2-inch wide foam brush.
Try not to thin the paint too much - you can see in the photo below that the cardboard warped a bit when it absorbed too much moisture.

The nice thing about latex paint is that it's water-based, dries fairly quickly and, if you apply it in a stippling/dabbing motion, has a texture that resembles concrete. 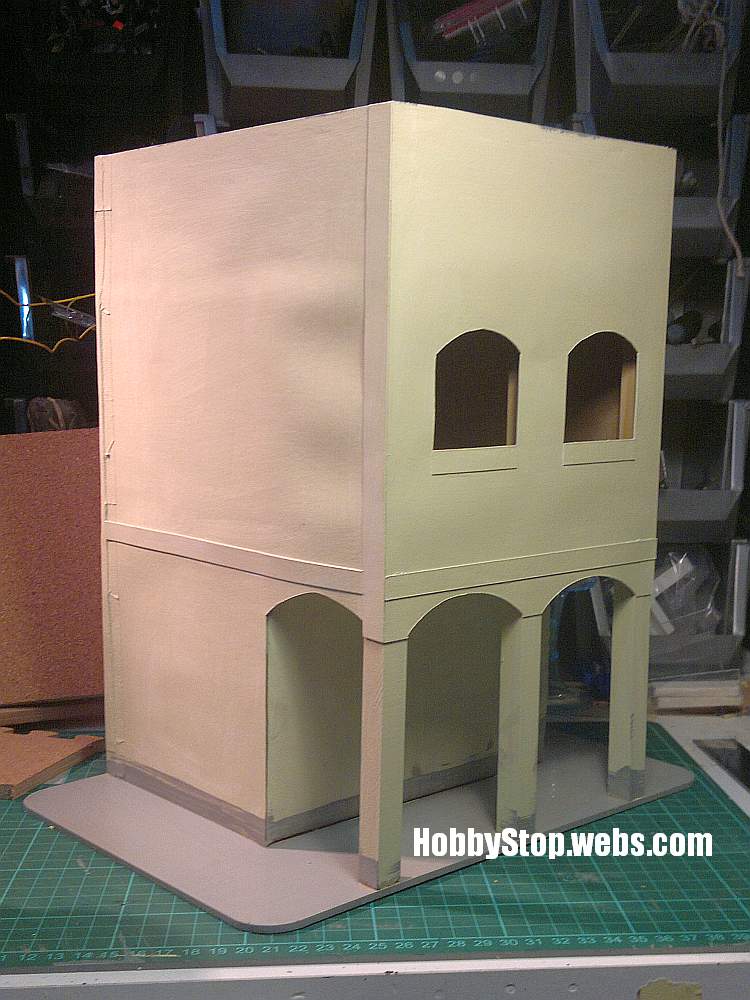 I also painted the cork roof.  The next shot shows preliminary weathering. I didn't bother painting inside the front room. 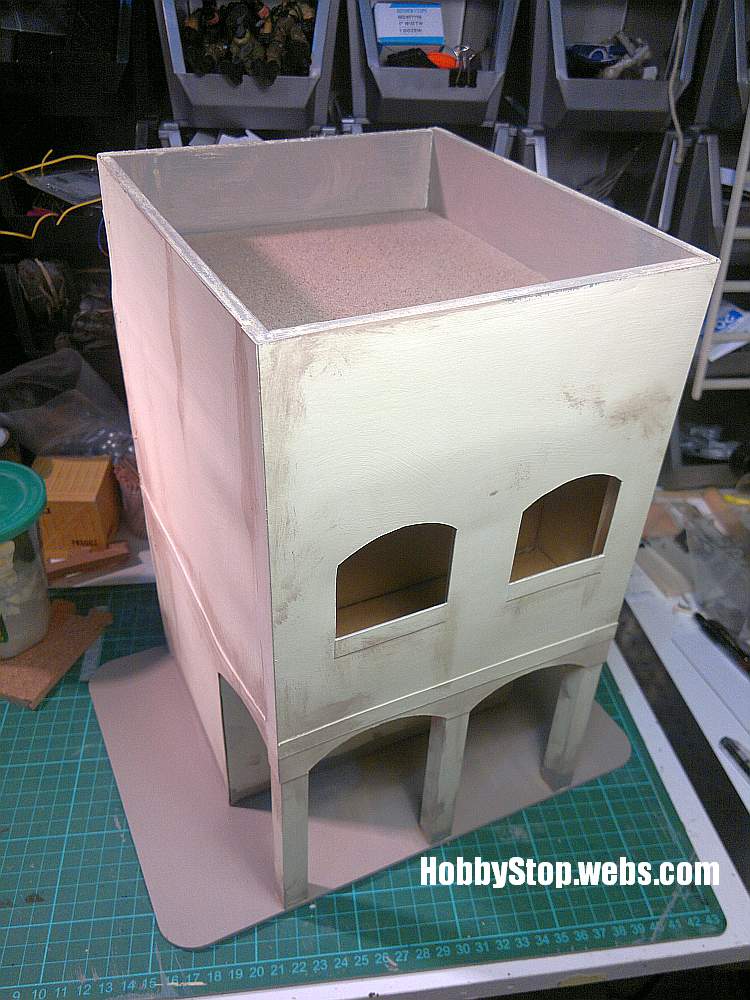 Here's the nearly-completed building, with cardboard window shutters and door: 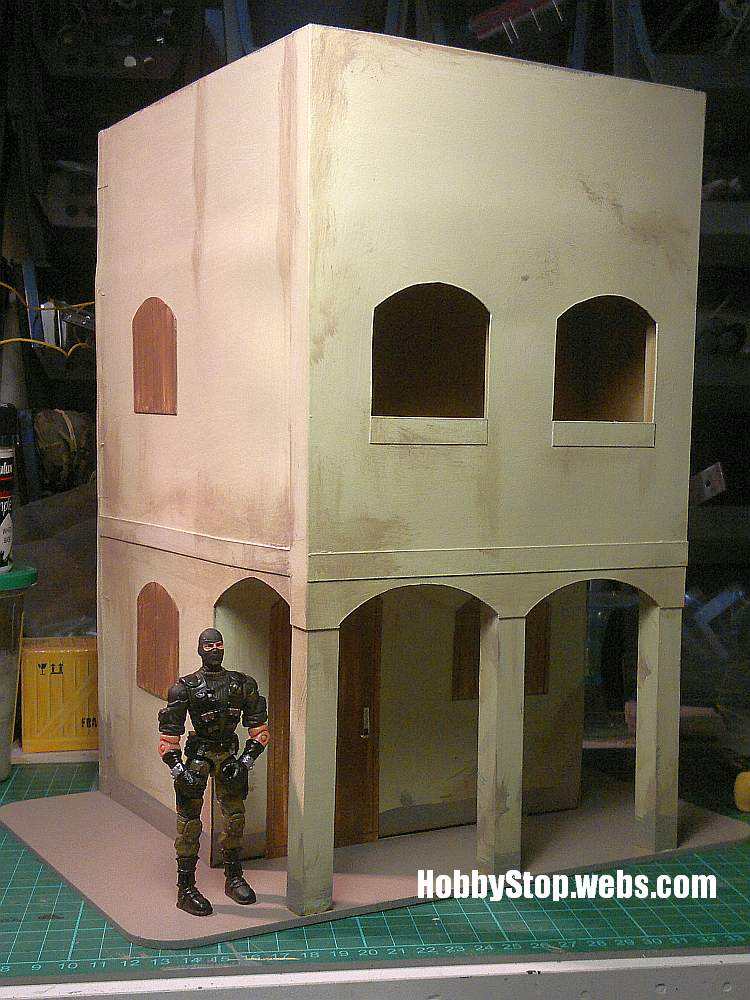 A little extra added detail - a side awning frame and roof stairway trapdoor (not shown) out of balsa wood, and a tin awning made from corrugated cardboard - and I can call this finished. 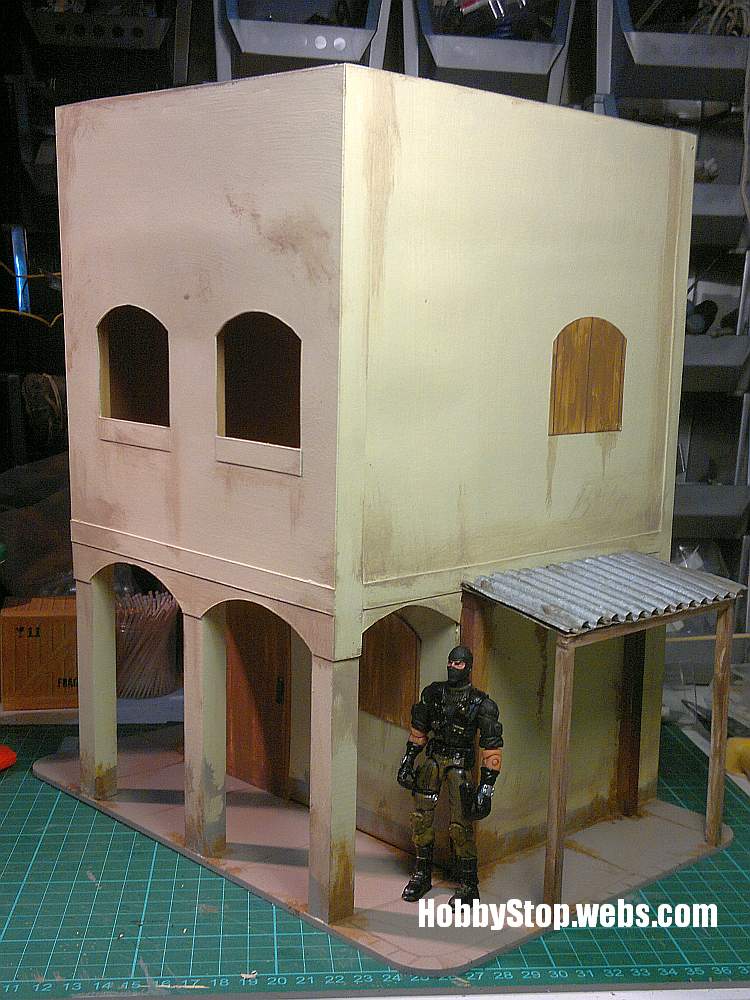 Total construction time was about 3-4 hours, spread out over a couple of weeks.

Even though it looks complicated, this was actually one of my easier projects and it would make a great first project for novice scratchbuilders.