This SUV is part of their Farm series and is meant to go with their horse trailer (available separately). 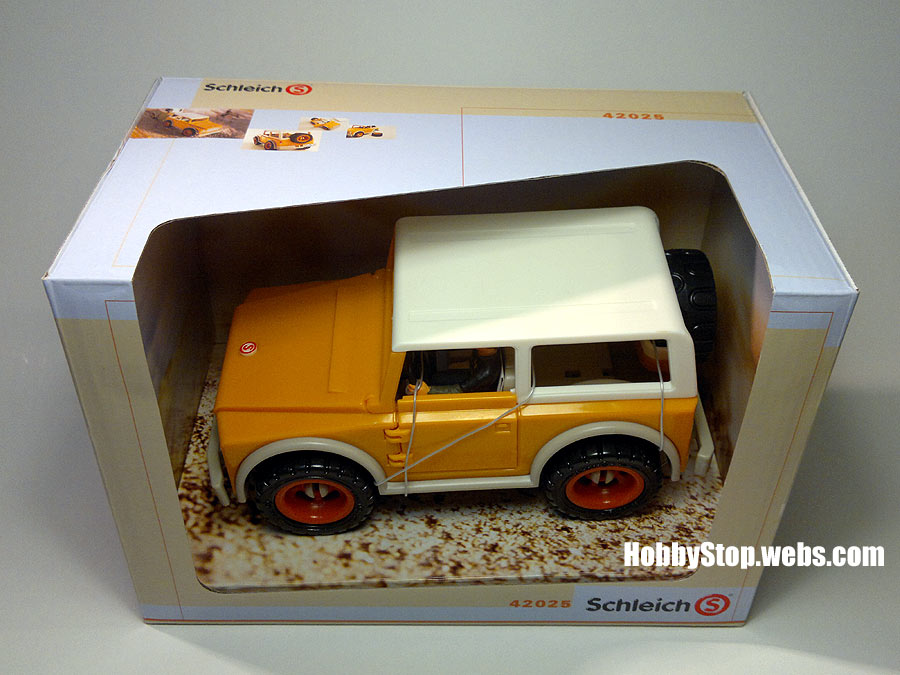 I'd been eyeing this toy for a long while now, with plans to mount a machine gun on it and turn it into a "technical", but I was turned off the $39 price tag.  Sure, it's German-made, and that's synonymous with quality and durability, but it's a bit on the expensive side for a toy that needs extensive modification for GI Joes to fit in.

Anyway, all of a sudden these vehicles seemingly disappeared from Australian shelves.  I read on one website (which shall remain nameless) that they had been discontinued.  I was unable to find one through my usual online sources, and I started kicking myself for letting it slip away (this happens to me a lot).  This was 3 or 4 months ago.

Then last week, I was on one of my "toy patrols" and I spotted a Schleich display stand.  I immediately scoured it top to bottom, and lo and behold, I found a solitary SUV on the bottom shelf at the back of the display (where someone had hidden it?).

Now that I have it, I see that a few Amazon and eBay sellers have it from $15-$20, but posting it to Australia would end up costing more than retail.

So anyway, after that sordid tale, here's my review.

Here's a couple more shots of the packaging.  Right side, showcasing the working suspension, removable  wheels and detachable roof: 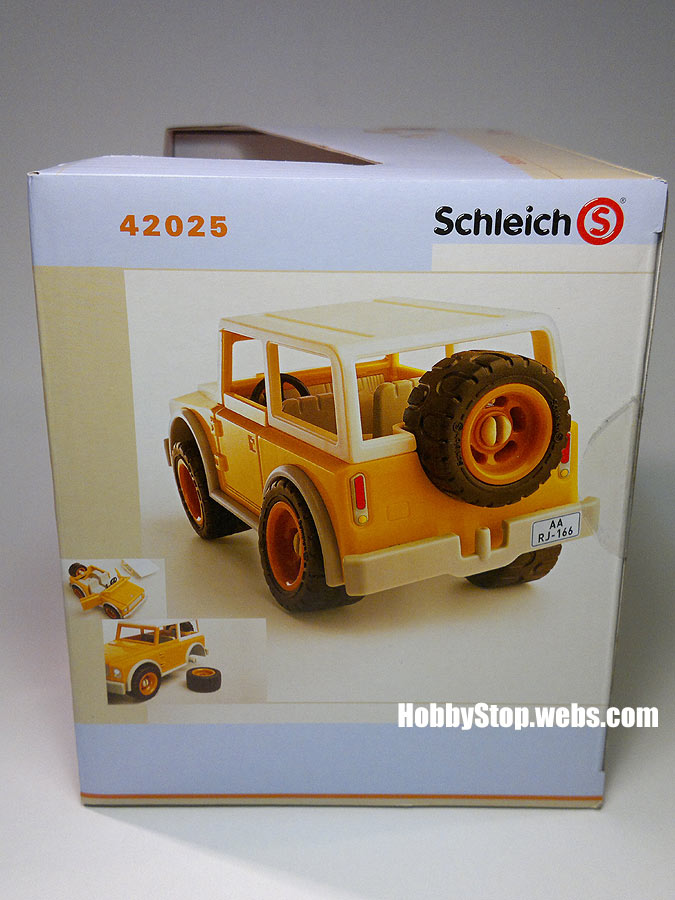 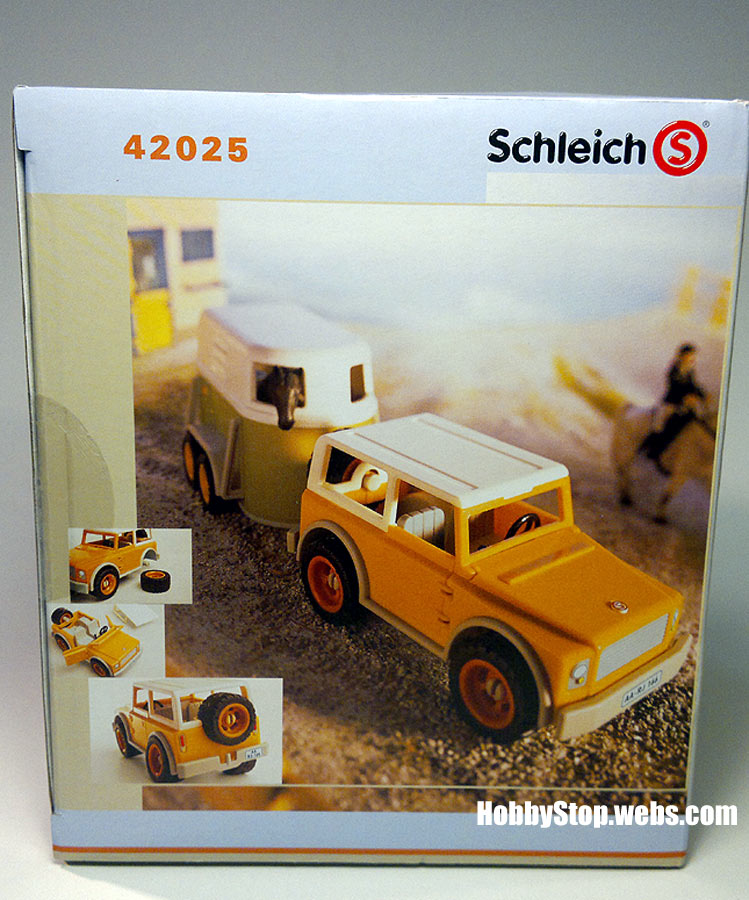 The back of the box has a bigger version of the photo on the left side.

The box is rather minimalist, well-designed and beautifully printed, and is nice and sturdy.  There's no text on it to describe the toy - just the Schleich logo and a product number, which is why most online sources call this a jeep / SUV / 4x4 / truck.

Here it is out of the box: 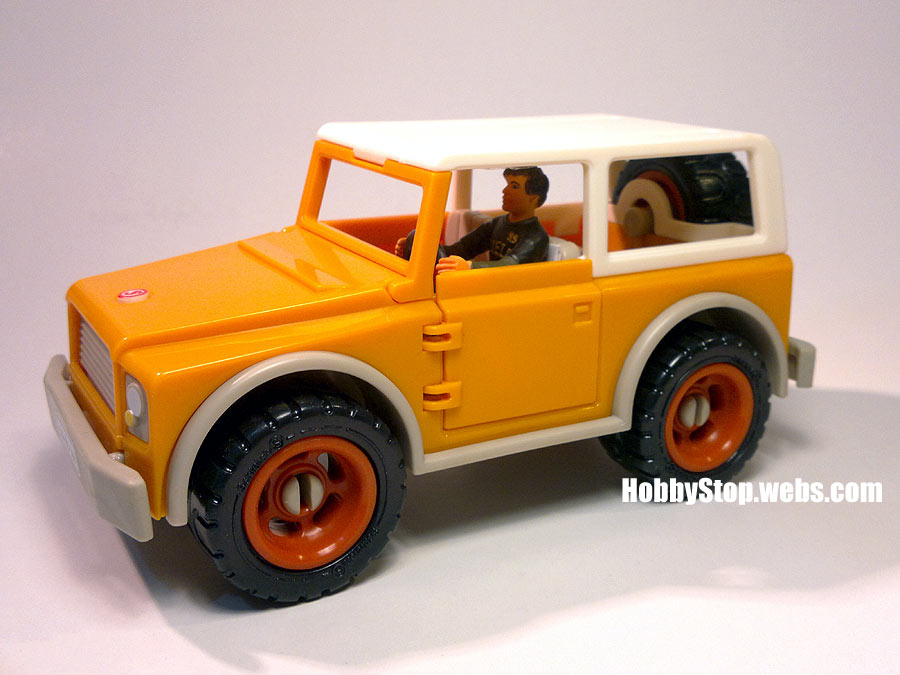 The overall shape looks like a Jeep Wrangler crossed with an old Range Rover.

It feels nice and solid in the hand, with a bit of heft.  A good sign, since the thing has no metal parts whatsoever - not even screws.   All parts are moulded in sturdy plastic, and are snapped together (no glue here).

This is a good thing because it's easily disassembled for customization, using some gentle persuasion from a small screwdriver.  And yet, despite that, it won't easily take damage or fall apart - it's fallen off the kitchen table a few times and survived without even a scratch. 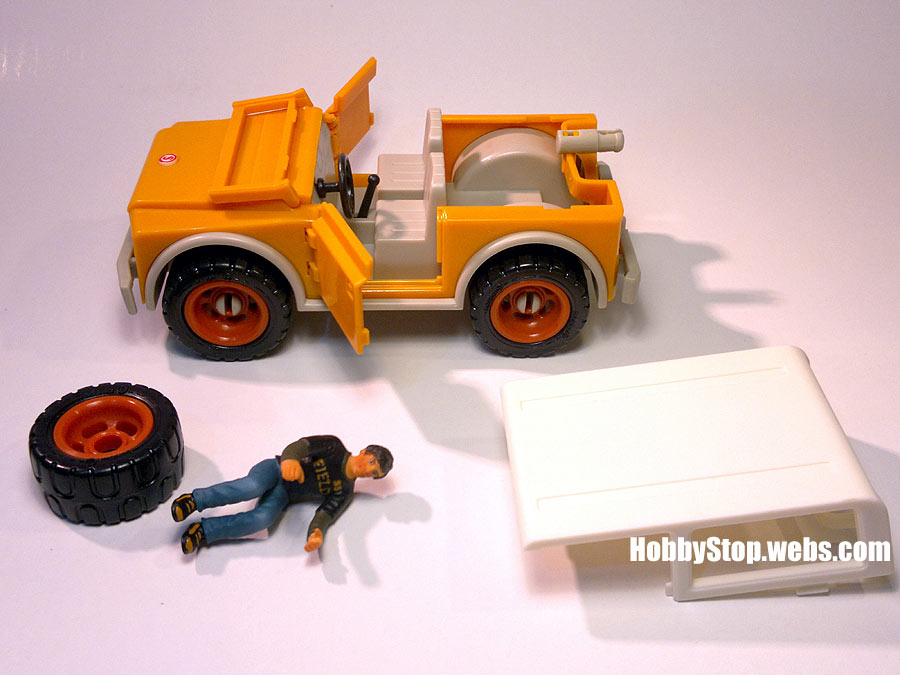 The driver is the standard 1/20 scale that Schleich uses, although he looks a little small when sitting in the SUV.

He's moulded in a hard rubber material, and is well-sculpted and painted.  Like all Schleich figurines, he's also non-poseable.  This doesn't bother me, as I won't be using him anyway.

Back to the SUV - here's a pic showing the suspension at work: 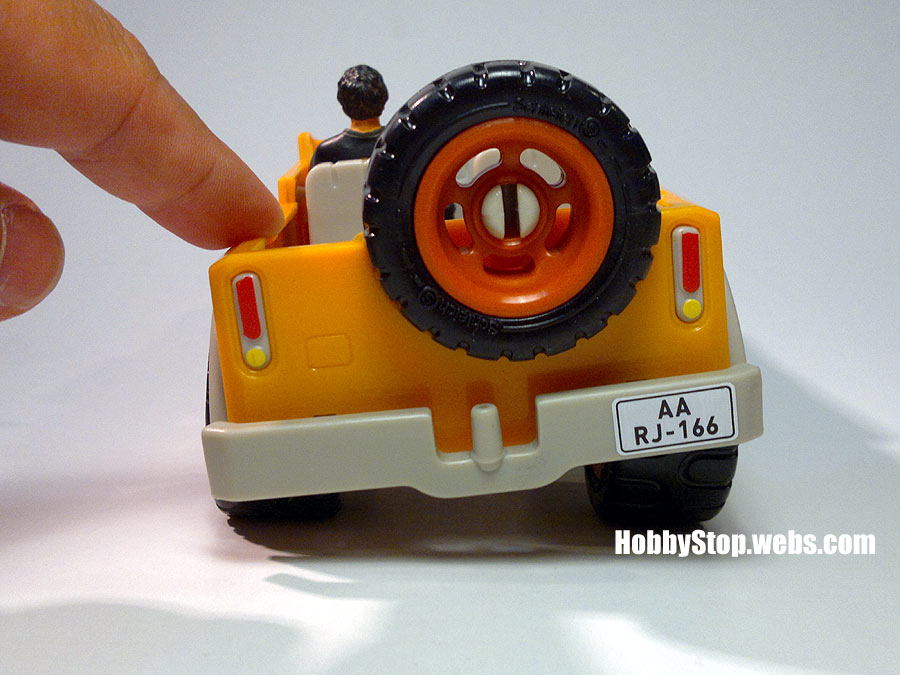 The front and rear axles each have a central pivot which also travels up and down a groove in the chassis.  An X-shaped spring made of strong, flexible plastic sits above the axle centre.

It sounds complicated, but really isn't.  It's ingeniously simple, and a credit to the Schleich designers.

Being moulded in colour, there's not much paint on the SUV - a bit of yellow-orange on the turn signals and a bit of red on the tail lights and badge.  The number plates appear to be printed on.

The driver figure has the typical clean Schleich paint apps, with even coverage and a hint of shading, and very little paint slop. 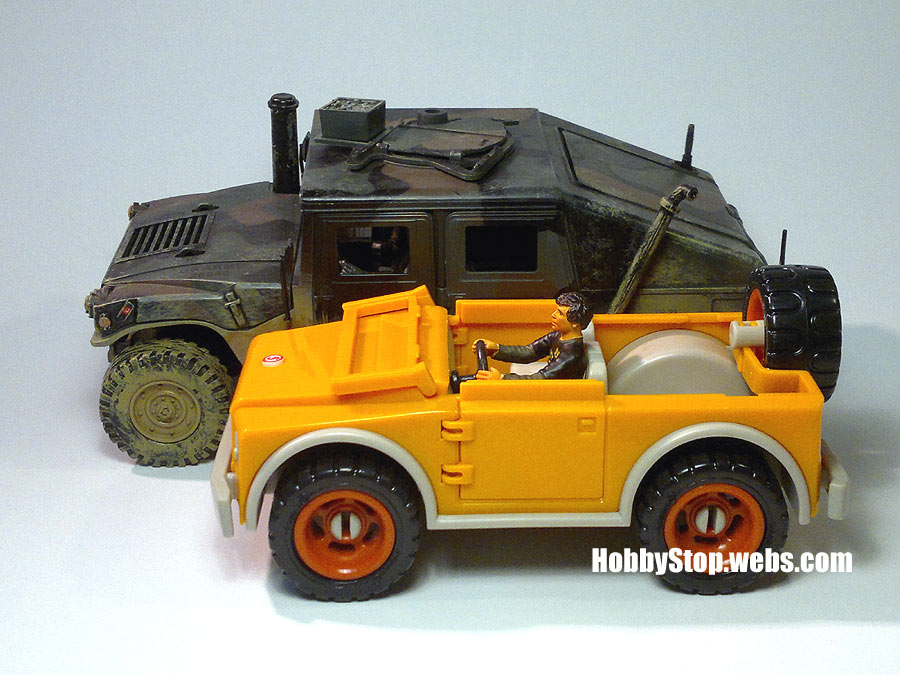 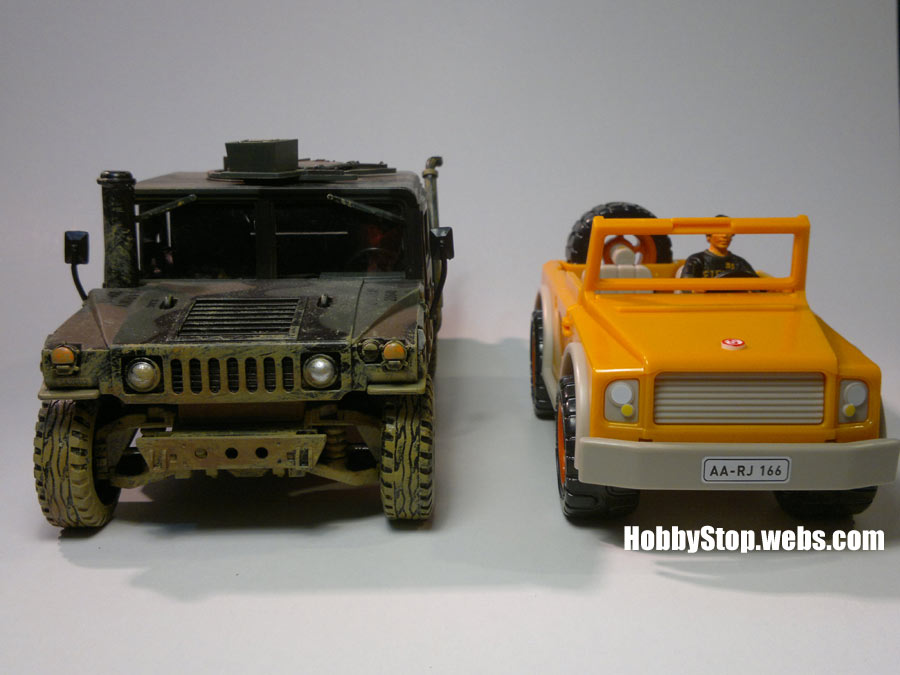 Overall dimensions look OK, but the SUV's interior needs work in order to fit 1/18 figures in it.

Here's Clutch struggling to fit in the seat: 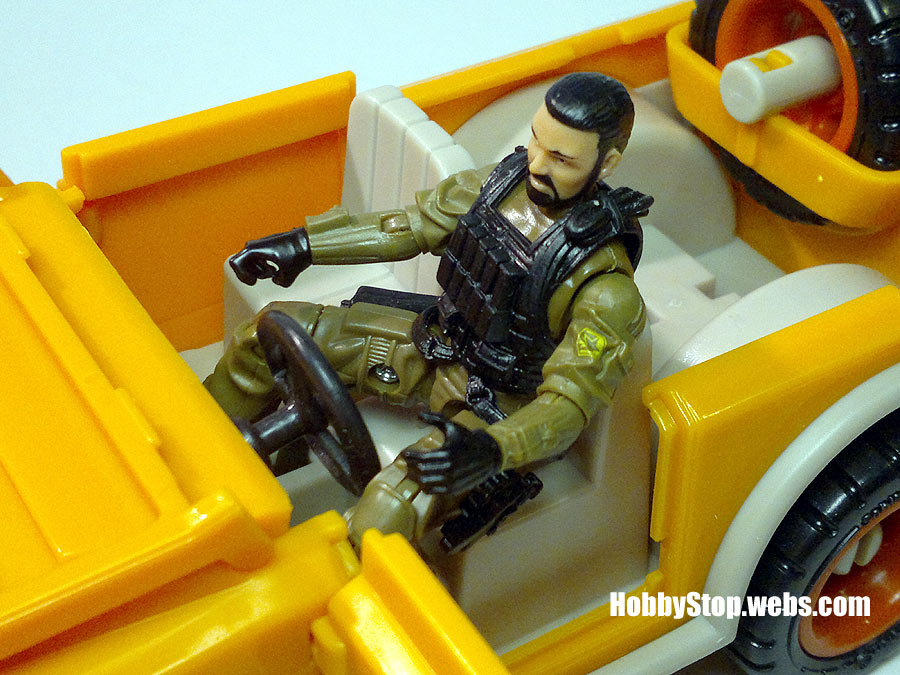 The Schleich driver looking like a little kid next to Clutch and a Power Team Elite soldier. 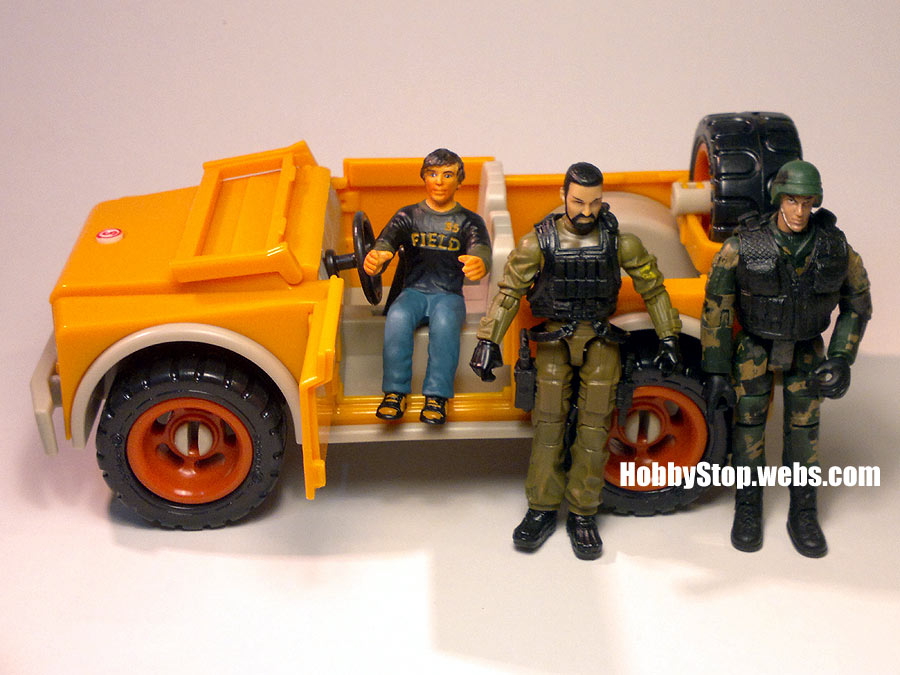 For $39 I can live with the perceived shortcomings, knowing that I got a quality toy.  Also, for that price I don't feel too bad about Dremeling the interior to fit my Joes.

Even if I were too lazy to modify it, I could still use it as a background prop for dioramas with a bit of weathering.

For Schleich collectors this SUV is a gem, and 1/18 hobbyists will also find many uses for it.