I had a lot of toy tanks growing up.  A battery-operated Chieftain tank that went forward and backward... a deformed tumbler-style tank that would flip over when it encountered a wall and drive back the way it came... a big one I made out of a shoe box... my cousin's GI Joe MOBAT... tanks were a lot of fun.

I always wanted an R/C one, but they were expensive back in the early '80s.  I was insanely jealous when my younger brother got an R/C Sherman for his 10th birthday, and I wrested control of it whenever I could.

I contented myself with 1/72 static model tanks from Hasegawa and Airfix until I spotted this baby. 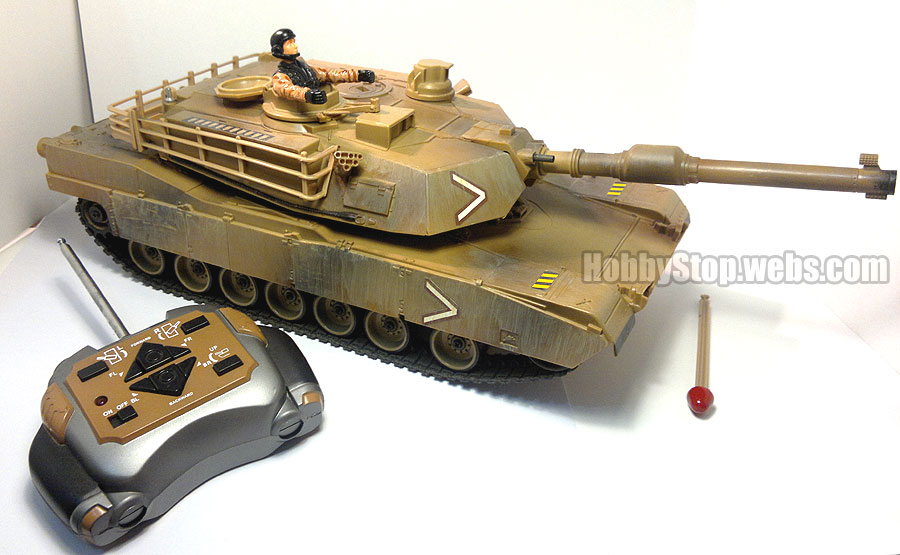 I spotted this last year (2010) in the clearance aisle at Toys R Us for $20 Australian, marked down from $79 because it had a crumpled box.

Despite the damaged packaging, it works almost perfectly.

The cheap-looking figure that comes with it (more on him later) is Joe-scale but the tank itself is undersized.

Comparing the toy to photos of the real thing, I'd say the detail on this looks pretty good.  The viewing periscopes are there, as are the smoke launchers and the stowage baskets on the turret.  The blast panels on the turret front are asymmetrical, which I believe shows that this is an early model M1.

No machine gun was included on my toy, although there is a mounting point for it in front of the commander's hatch.  I suspect it may have been lost when the packaging was damaged.

Obviously several concessions had to be made regarding detail vs. playability (this is a kids' toy after all), but to my untrained eye it looks "right".

The tank is moulded in a dark tan plastic, with faint hints of a camo pattern sprayed on.  It's a bit too dark for US Army desert camo, but repainting it seems like too much bother.

I decided to drybrush it all over with light khaki, which helped brighten up the dark colours.  There were several ridiculous stickers on the turret and main hull, but I was able to remove them before weathering.

A red-tipped projectile is included, which is inserted into the spring-loaded gun barrel and fired by pressing a small square button on the top of the gun mantlet.

Range is only a couple of feet, so it's pretty useless.  I put the dart into my spares box. 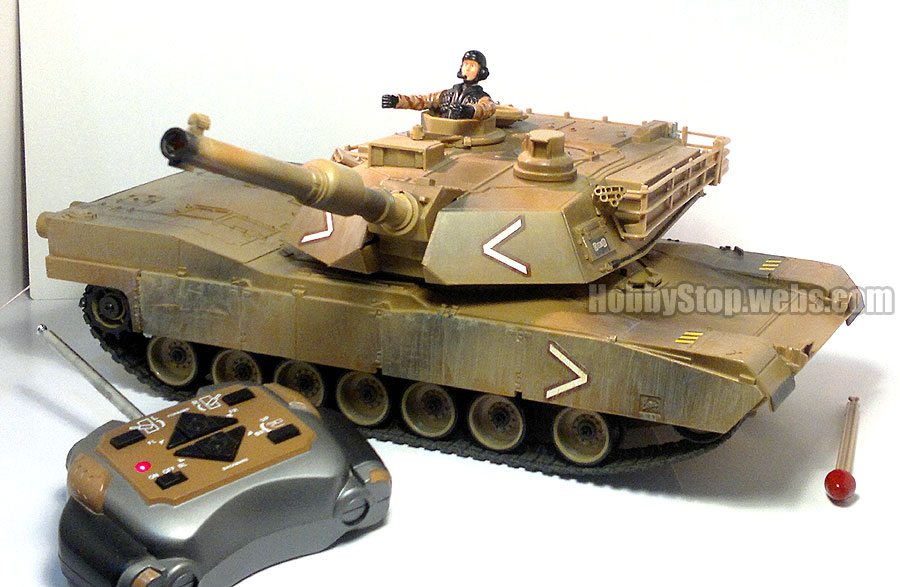 The remote controller has a lot of buttons on it, but the controls are easy to figure out.

This thing is a blast to play with.  It's fully-functional: it moves forward and back, turns on a dime, the turret traverses 330 degrees, and the main gun elevates and depresses.

On my tank, however, the main gun tends to jam in the elevated position and I need to push it back down by hand.

The rubber tracks also tend to slip off the rear road wheels when trying to turn on carpet, but driving in reverse a few inches usually re-seats them without having to pick the toy up.

Despite these (minor) quibbles, it's gret fun driving the tank around.  It can mount obstacles and climb up 40-degree inclines quite easily.

It can handle being driven outdoors in the garden, although plant material can get caught in the tracks and may jam the drive wheels if they wrap around the axle.

I haven't tried driving it in the wet, though - I doubt the electronics can take it.

The tank commander is a generic-looking figure, with shiny brown camo and black gear.  He has a measly 5 points of articulation (neck, shoulders and hips), so good luck trying to pose him in the turret.  As it is, he's too tall for the hatch because he has no knee joints.  I had to open him up (1 screw on his back) and remove his legs to get him to fit.

He still looks ridiculous because he holds his arms straight out in front of him.

Even though the figure is crap, he'd make an OK background character after a decent repaint. 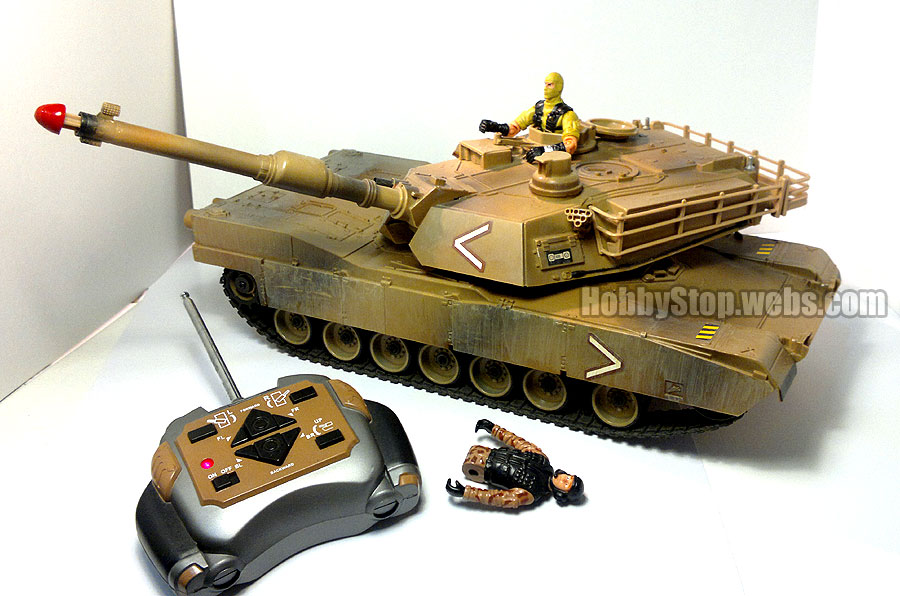 A GI Joe figure (Beach Head, in this case) fits better, at a more realistic height (he's kneeling in there).  The tank is still too damn small though.

With the Joes standing next to it, you can see the scale discrepancy:

Still, it doesn't really bother me because the tank is usable as a background prop in forced-perspective photos, like the next shot: 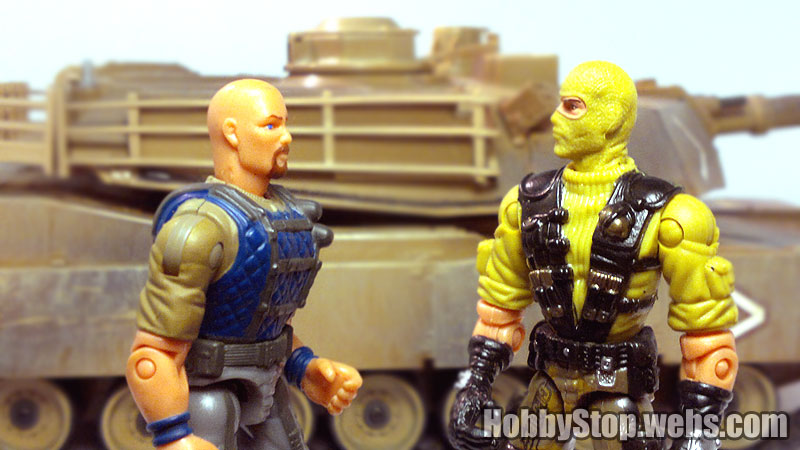 If this were a simple static toy I probably wouldn't pay the $79 TRU were charging.  For that price I can get the "Power Team Elite" M1 Abrams, which is correctly scaled, comparably detailed and includes 3 figures with superior articulation.

$20 seems about right for this - IF it were a static toy.  The fact that it's a fully-functional RC makes the $79 price tag reasonable, and the fact that I snagged it for 1/4 of that makes it an absolute bargain.

Despite its obvious flaws, I think this is a very cool toy.

To see the tank in action, please visit my Videos page or click the links on the sidebar.