I'm always on the lookout for stuff I can use for dioramas or photographic props.  I was on one of these "expeditions" recently when I spotted this 1/18-scale wired-RC excavator (made by Xiongda) in a local Chinese gift shop for $14.95 Australian. 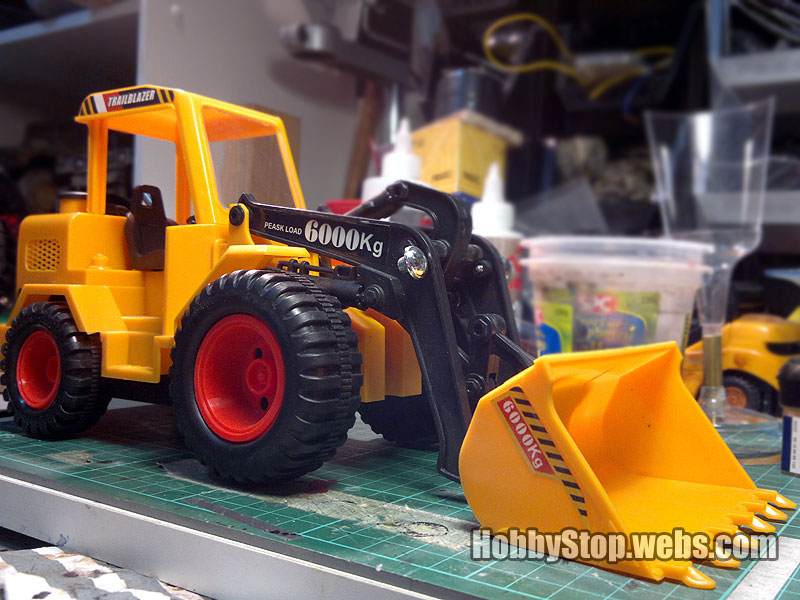 The colorful box (and the obligatory "engrish" text) caught my eye.  Note that the illustration on the box doesn't match the actual toy. 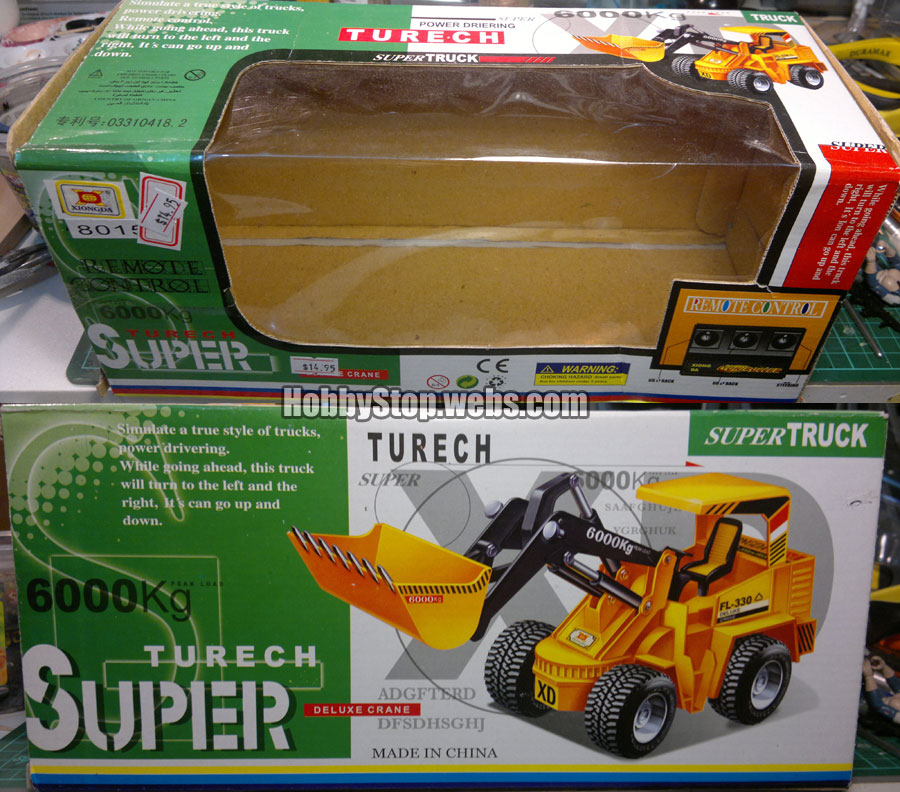 The box was pretty sturdy, and it had to be, considering the toy was just sitting in it with no plastic or cardboard inserts or twist-ties to hold it in place.  Remarkably, the toy was undamaged and ran well right out of the box on 3 AA batteries.

Here's the excavator (after a 15-minute weathering job) with its tethered controller. Note that a G.I. Joe figure fits perfectly in the seat.
A few of the stickers were applied crooked.  Even though they tore when I tried to peel them off, I was able to straighten them out with minimal damage.  Any visible rips were camouflaged by the weathering. 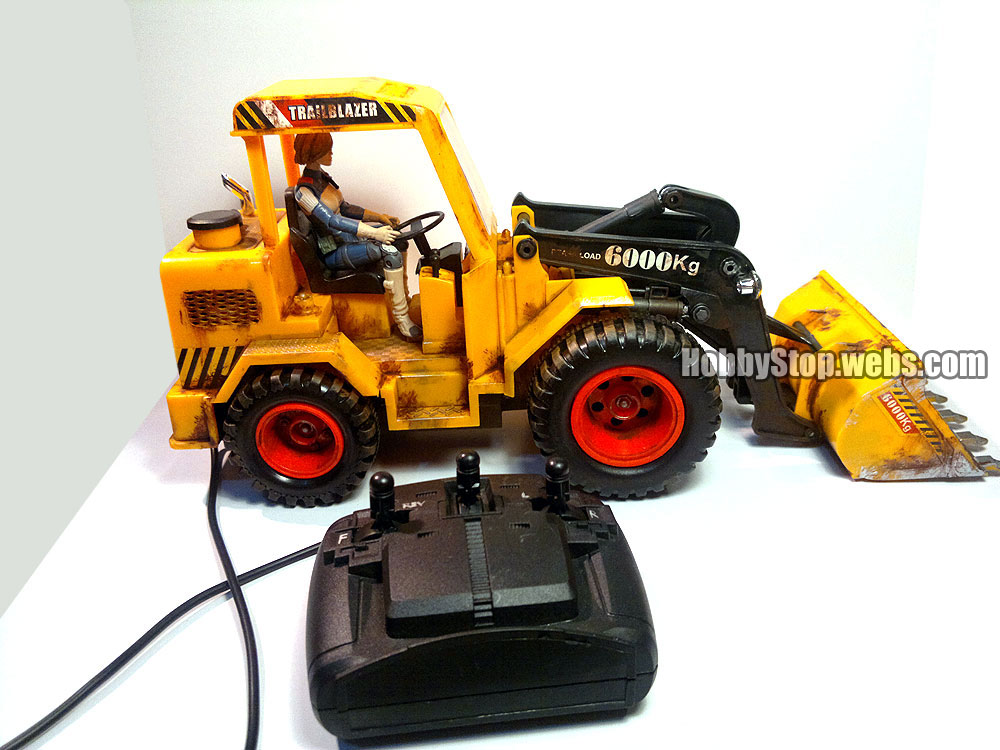 The control scheme is a bit strange, because the directional control sticks only move left and right.  The left-hand stick controls the forward and reverse movement of all four wheels, and the right-hand stick steers by driving the wheels on one side (like a tank).  The central stick controls the bucket's up-and-down movment.  The bucket has no tilt function, unfortunately.

If you're used to other R/Cs, this control setup feels unnatural and counterintuitive, but with a bit of practice it's easy to use.  My main gripe is that the control wire is too short and is always being run over by the rear wheels when reversing.

Speaking of wheels - the tyres look rubber, but they're moulded from hard plastic.  They look great, but have little grip on a wood floor.  You're better off driving it on carpet, or outside

The next photo is a closer look at the control cab.  It's nicely detailed, with raised tread-plate, non-movable tiller and levers, and driver's seat all cleanly moulded with no excess flash or mould marks.  Fantastic for such an inexpensive toy.  I applied a thin brown wash to bring out the details more.  Note that there are no foot pedals, or much room for the figure's feet. 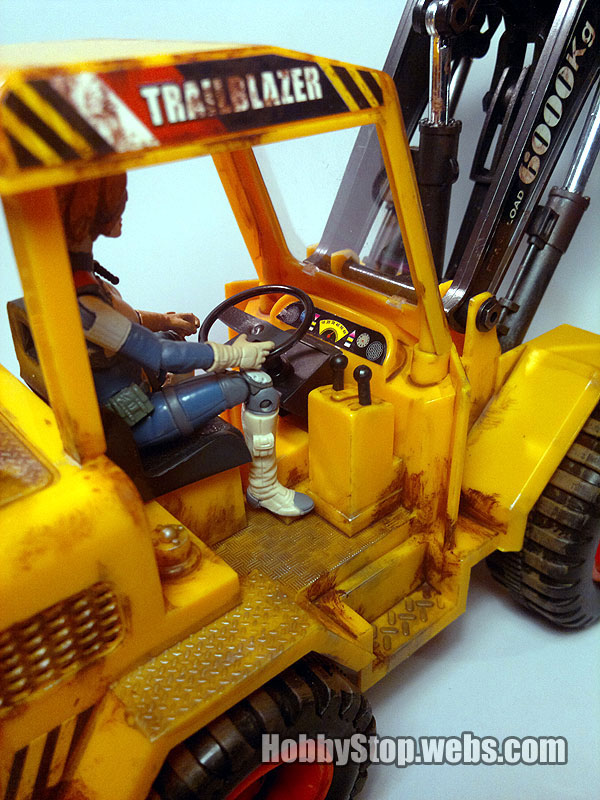 Below is another shot of the detail on the rear.  Note the cleanly-moulded ventilation grills, fan detail on the rear, plus an air cleaner and chromed exhaust on top.  The exhaust "pipe" doesn't have a hole in the end, but that's easily added with a low-speed drill. 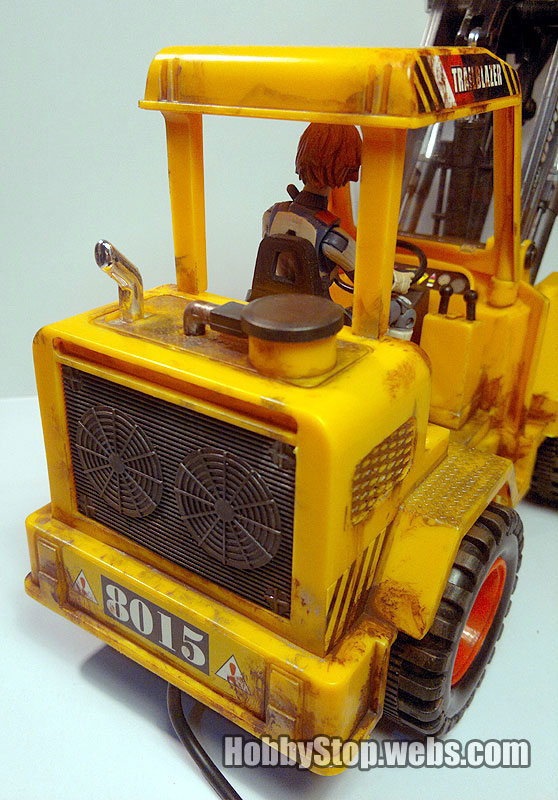 Another shot of the raised bucket. 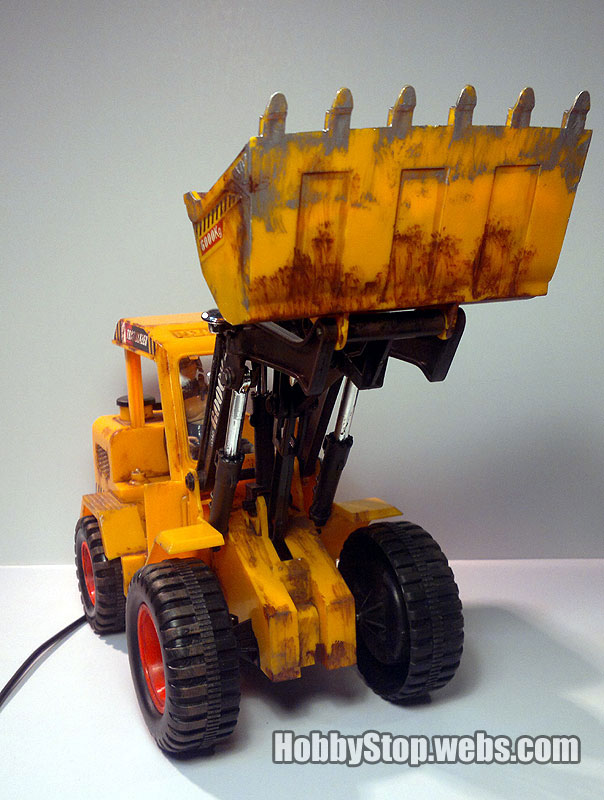 The bucket mechanism can easily lift two GW paint bottles, but struggles to lift three.  I haven't tested it outdoors yet, so I can't comment on how well it actually digs dirt. 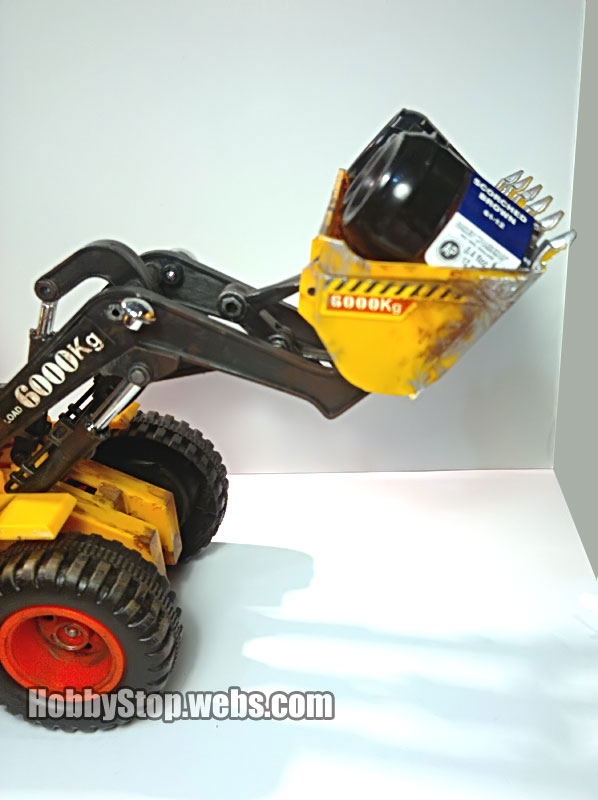 For Aus$14.95 this is a very good toy, with clean mouldings and sharp detail, and the plastic looks to be good quality as well - none of the shiny, brittle stuff you'd expect from an unknown (outside China) manufacturer.  The weird control scheme took some getting used to, but it doesn't bother me now.

If you're fascinated with construction machinery, looking for diorama fodder, or just want an unusual R/C subject, I'd recommend picking this up if you can find it.